Combo Panda is a young animated panda gamer who does let's plays. He is voiced by Bradley William Smith.

Combo is an 11-year-old Panda with four tufts of hair with yellow highlights and big, red headphones with a mic on the right.

Combo is defined as being hardcore and easily enraged. Sometimes this, and his aggression, get the better of him, making him a little reckless and stubborn. However, he has enough control so as to not go "overboard" on innocent civilians, no matter how trivial the offense. He is a very experienced gamer who participates in every tournament, and hates losing as much as his enemies. 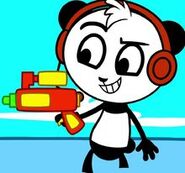 Combo as he appears in EK Doodles.

Combo as a magician

Combo in his swimsuit

Combo as a construction worker

Combo (left) in his space suit

Some concept art for Combo's character, made back in 2017
Community content is available under CC-BY-SA unless otherwise noted.
Advertisement