Peck the penguin is a main character in Ryan's World. he has slowly adapted from being a nerdy, intellectual bird on The Gus Show, to a former gamer on the VTubers Channel. He is the friend everyone in Ryan’s World goes to for assistance in Science or Math.

Peck was a little penguin living in Antarctica. he was about to take a trip to the North Pole to find a golden popsicle. he packs his stuff and himself in a cardboard box ready to be ''mailed'' to the North Pole. Around the same time, Gus is looking for gummies but he doesn't find any, so he orders more of them. Peck has been mailed to the North Pole, or in this case, Gus' house!, Gus meets Peck and they become friends. As seen in later episodes, he chose to live near Gus. He is voiced by Brianna Jaynes from 2017 to late 2018, then Jose David Ramos onwards.

Peck is a purple 9 year old penguin who has a red bow-tie on his neck, as well as big glasses and a purple tuft of hair. He also has a blue snowflake pattern on his stomach.

Peck in his ice cream truck 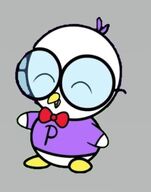 Peck in his space suit

Peck in a tuxedo

Peck in his evil form
Community content is available under CC-BY-SA unless otherwise noted.
Advertisement